As a severe drought devastated the agriculture of numerous Pakistani provinces, locals desperately awaited the onset of the monsoon rains in the summer months. However, this year the rainy season brought a new wave of destruction that further devastated the Pakistani population. Weeks after it began to rain in July, over one-thirds of Pakistan was under water. By the end of August, WHO Chief Tedros Adhanom Ghebreyesus classified the floods as a grade 3 emergency— meaning that all three levels of the organization are involved in the response: the headquarters, country, and regional offices. Over 33 million people have been affected by the flooding with about 1500 people reported killed and more than 660,000 people displaced in camps. Aside from widespread damage to houses, agricultural land, and livestock, health officials expect severe implications on the overall health of Pakistani citizens. 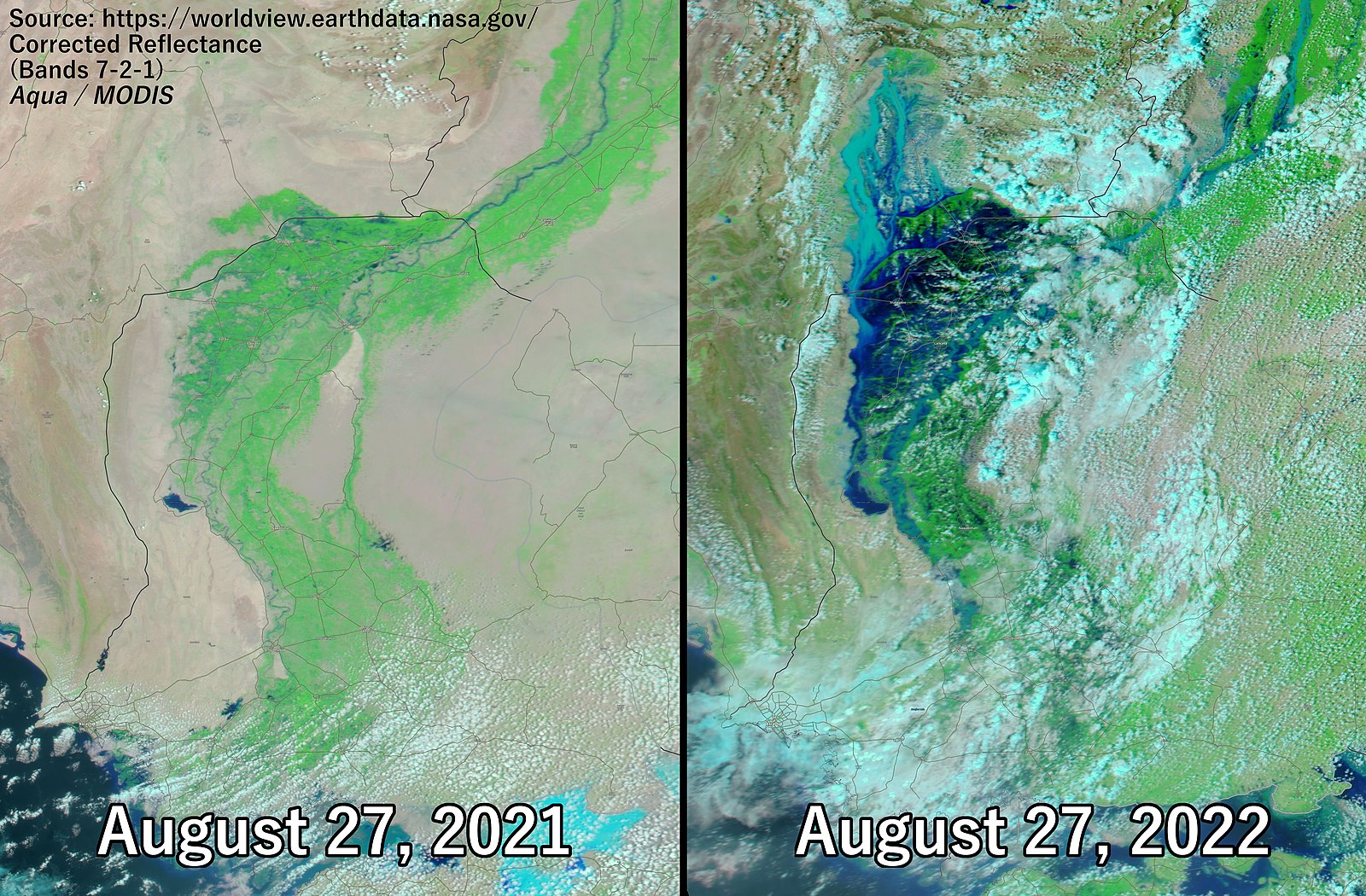 Numerous health facilities have been severely affected as a result of the flood’s devastating effects on national infrastructure. Specifically, the flood inflicted over $10 billion US dollars worth of damage, including the destruction of at least 4000 km of roads and 162 bridges, states Shabbat Baluch, Pakistan country director for the International Rescue Committee. In fact, the main supply route from the port city of Karachi has been blocked after a bridge linking it to the affected region was swept away by the flood. On August 28, 2022, the WHO stated that “888 health facilities have been damaged in the country of which 180 of them are completely damaged. Access to health facilities, healthcare workers, and essential medicines and medical supplies remain the main health challenges for now”. The floods have worsened the issue of health service accessibility in an already overburdened healthcare system. Even prior to the floods, rural and urban areas have experienced significant disparity in access to healthcare during the ongoing cholera, typhoid, measles, leishmaniasis, COVID-19, and HIV outbreaks. While these issues continue, the flood has further aggravated the spread of illnesses such as acute watery diarrhea, dengue fever, malaria, and polio, especially in areas where water and sanitation facilities have been damaged.

Decreased accessibility and availability of medical care resulted in the worsening of pre-existing diseases as well as the introduction of new illnesses within Pakistanis impacted by the floods. The flood forced thousands to live in areas with stagnant waters, exposing them to waterborne diseases such as malaria, dengue fever, and diarrhea, as well as skin conditions such as bandino and skin and soft tissue infections. In fact, about 2.3 million patients have been treated in the field and mobile hospitals in the affected regions since July 1st, many of whom complain of being forced to drink and cook with unsafe water. A significant increase in malaria cases has been the cause for increasing concern, the UN states. This malaria outbreak was largely due to displaced families exposed to swarms of mosquitoes as well as snake and dog bites. Specifically, UN Pakistan said cases of malaria spread quickly— almost 44,000 cases reported in the southern provinces during the week of September 22nd. Neighboring provinces have reported an increase in acute respiratory problems, scabies, eye infections, and typhoid patients as well. However, due to the significant decline in resources, mobile clinics are struggling to maintain supply of medication and specialists. As a result, a health emergency has been declared in the affected areas.

Disasters such as the flood have only further disadvantaged already marginalized populations, including women who are constrained by economic resources. In many communities in Pakistan, women are culturally expected to hold domestic and childcare  responsibility. These expectations are only magnified during such crises, putting impoverished women further at risk. Overall, studies find that women and children are 14 times more likely to die during a disaster. The gruesome conditions of a flood make it extremely difficult for women to sustain their maternal responsibilities, or even carry a pregnancy to term. The UNFPA estimates that 650,000 women currently located in flood-affected areas are in need of maternal health services, and up to 730,000 will deliver babies during the month of September. Based on current trends of healthcare accessibility and food distribution, this will likely result in a further increase in rates of infant mortality and malnutrition. Reduced access to contraception amid the disruption of medical care is also expected to lead to a rise in new, unwanted pregnancies in the coming months.

Displaced women also find themselves at a higher risk of attack and domestic abuse. Data from areas in Pakistan previously affected by floods show a spike in gender based violence and rape in resettlement camps. Oftentimes, the victims were women who had left their tents to fetch water, firewood, rations, or to use the toilets at night. In addition to the increase in incident of assault, experts find that disasters such as these increase the potential that women are traded for sex for access to services or resources due to the lack of their control over the family’s financial resources.

As of September 15, 2022, at least 528 children had died as a result of the catastrophic floods, finds UNICEF. This crisis affects children in a similar manner to women, with those from impoverished families tend to suffer more as a result. Many poor families are forced to seek shelter alongside busy roads in order to avoid areas of stagnant water, hence putting children at risk. About 16 million children have been impacted by these floods, 3.4 million of whom are in need of immediate, lifesaving support. Decreased access to healthcare and nutritive foods has resulted in a significant increase in malnutrition and illness within children — an issue that only seems to worsen with time. UN officials state that, “The sad reality is that without a massive increase in support, many more children will lose their lives”.

The area which has been affected the most, known as the Sindh province, is largely agricultural. The province suffered the destruction of more than 750,000 livestock animals and 1.2 million hectares of agricultural land, reports the United Nations. The Sindh province contributes around a quarter of the country’s agricultural produce, including wheat, rice, dates, and sugarcane. Along with the delivery of medical supplies, the distribution of foodstuffs has become a major concern. In fact, the World Food Programme has called for $34 million U.S. dollars in food and cash assistance to aid in the relief process. According to UNICEF, the areas that are currently flooded have had issues of childhood malnutrition and stunting, which are only expected to worsen as a result of the floods. Many mothers are malnourished themselves, causing them to be exhausted, ill, and unable to breastfeed. In the long term, experts state that food prices and supply will be largely impacted by this agricultural destruction. However, exact predictions are difficult to make as they depend on the duration and severity of the flood, as well as the quality of aid Pakistan receives.

On August 30, 2022, The U.N. Secretary General stated that “The Pakistani people are facing a monsoon on steroids— the relentless impact of epochal levels of rain and flooding. As we continue to see more and more extreme weather events around the world, it is outrageous that climate action is being put on the back burner as global emissions of greenhouse gases are still rising, putting all of us — everywhere — in growing danger”. While scientists predict that rising global temperatures will result in increased rainfall during South Asian monsoons, the Pakistan floods have a far stronger link to global warming than one may imagine. Pakistan borders the Hindu Kush Himalayan mountain range and the Tibetan Plateau, a region that holds the largest reserves of freshwater outside the polar regions, causing it to be nicknamed The Third Pole. As global temperatures rise, glacial ice in Pakistan’s Gilgit-Baltistan and Khyber Pakhtunkhwa regions are melting rapidly, creating more than 3,000 lakes that are at risk of sudden bursting, the UN Development Programme said, which could put over 7 million people at risk. Glacial melting is not the sole contributor to these floods, Islamabad-based ecologist Parvaiz Naim claims. Regardless of the exact source, experts agree that climate change has played a major role in the mass-destruction that has occurred over the past few months.

Individuals who are most vulnerable to flood damage are those living in mud homes with hardly any resources, however, these individuals often hold minimal contribution to climate change. This observation rehashes the argument that major contributors to global carbon emissions owe reparations to countries suffering as a result of climate change. In fact, studies show that the world’s 46 least developed countries, home to 14% of the global population, produce only 1% of global carbon emissions from burning fossil fuels.This discussion has been a prominent topic at previous UN-hosted climate summits, and is expected to be a central issue at this year’s COP-27 summit in early November. This phenomena, known as “loss and damage” seeks to understand which countries are responsible for reparations to developing countries in order to address damages associated with climate change impacts. Pakistan, among many other countries, will be at the center of this discussion after this year’s catastrophic floods. According to a UN report, Pakistan, which is one of the countries most affected by climate hazards, has a carbon footprint as low as 0.9%.

How can I help?

Due to a lack of publicity, the Nashville Metropolitan Area does not have any opportunities for the public to contribute to the crisis in Pakistan. This fact is simply a result of a glaring issue many global leaders have been urging the world to notice. Although Pakistan is facing a massive humanitarian crisis, the international response is nothing short of minuscule when compared to other global issues. For example, the war in Ukraine, where around 12 million people were displaced, gained global attention for months on end — both in the public and political spheres. On the contrary, the Pakistan floods, which resulted in almost three times the number of people displaced, did not  receive the same attention. Similarly, the recent funeral of Queen Elizabeth II attracted over 11.4 million viewers in the United States alone, making it one of the televised programs with the largest audience body in history. This response by far exceeds the attention gained by humanitarian crises in the “global south”, suggesting the presence of an underlying bias present within our society. WHO Chief Tedros Adhanom Ghebre claims the world “is not treating the human race the same way”. New York Times Columnist Fatima Bhutto argues that “it is either a snide form of racism— that terrible things happen to places like Pakistan— or an utter failure of compassion”. While many local organizations are providing most of the relief for those impacted, only 10% of survivors have received any assistance.

As young individuals in the United States, it is easy to feel detached and helpless from global crises such as the one in Pakistan. However, seemingly minor actions can truly have a large impact when performed in a collective manner. If you possess the resources to do so, donations to Pakistani organizations such as Aga Khan Development Network, Edhi Foundation, and the Hidaya Foundation would make the largest impact at a local level, allowing domestic response organizations to regain agency in recognizing and providing aid to the needs of regional populations. As finances can be a constraining factor, the mere discussion of the issue within your circle of influence can make a significant impact on the amount of attention the crisis is receiving, allowing more resources to be allocated to helping those affected.